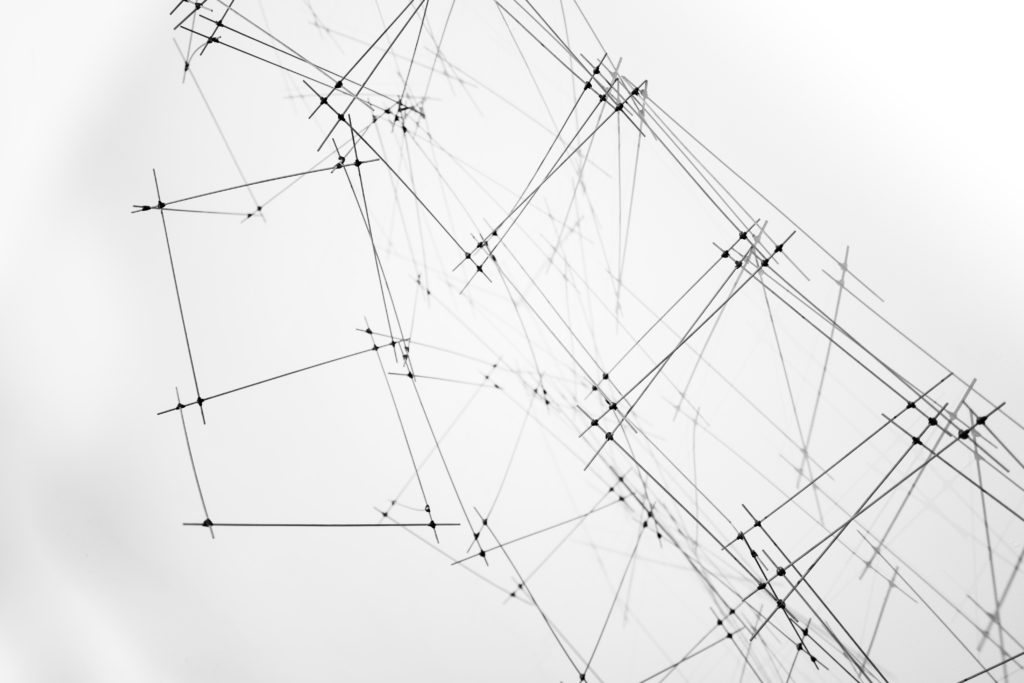 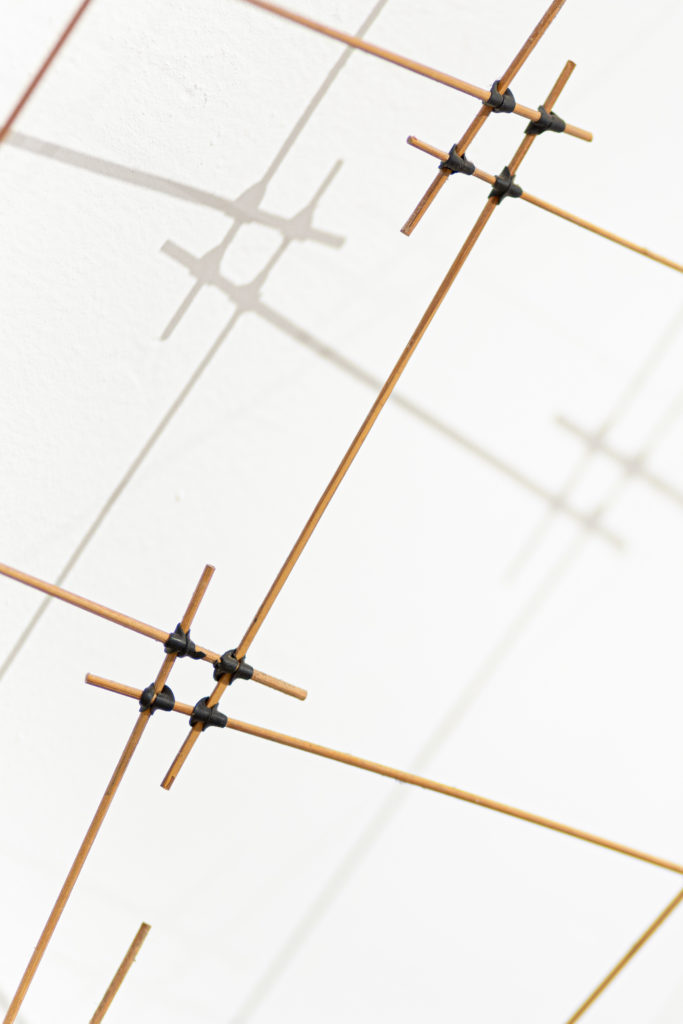 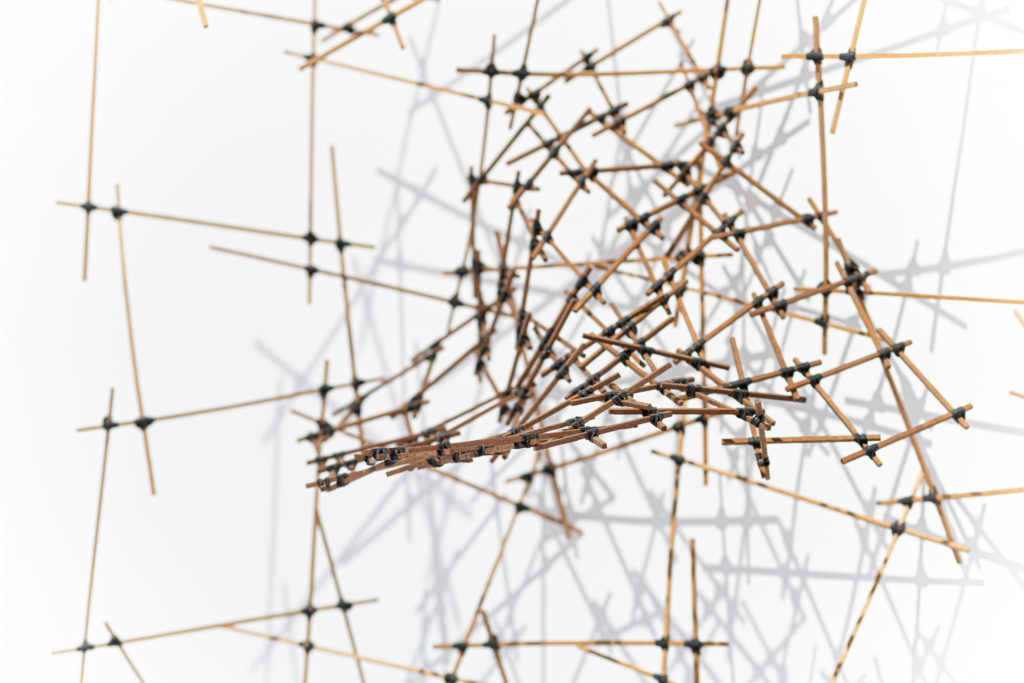 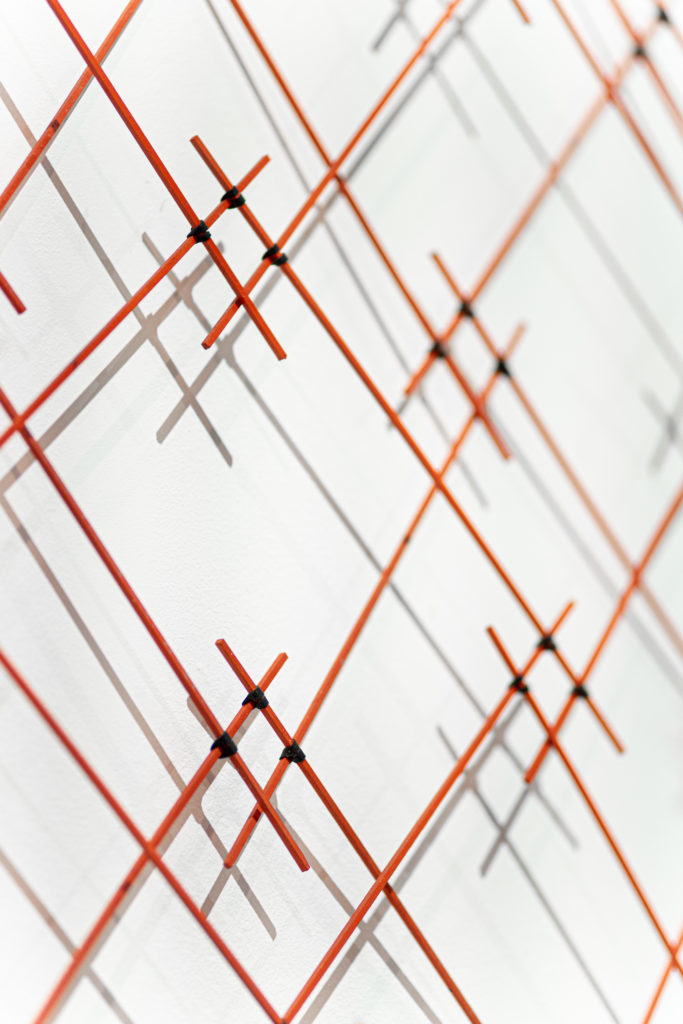 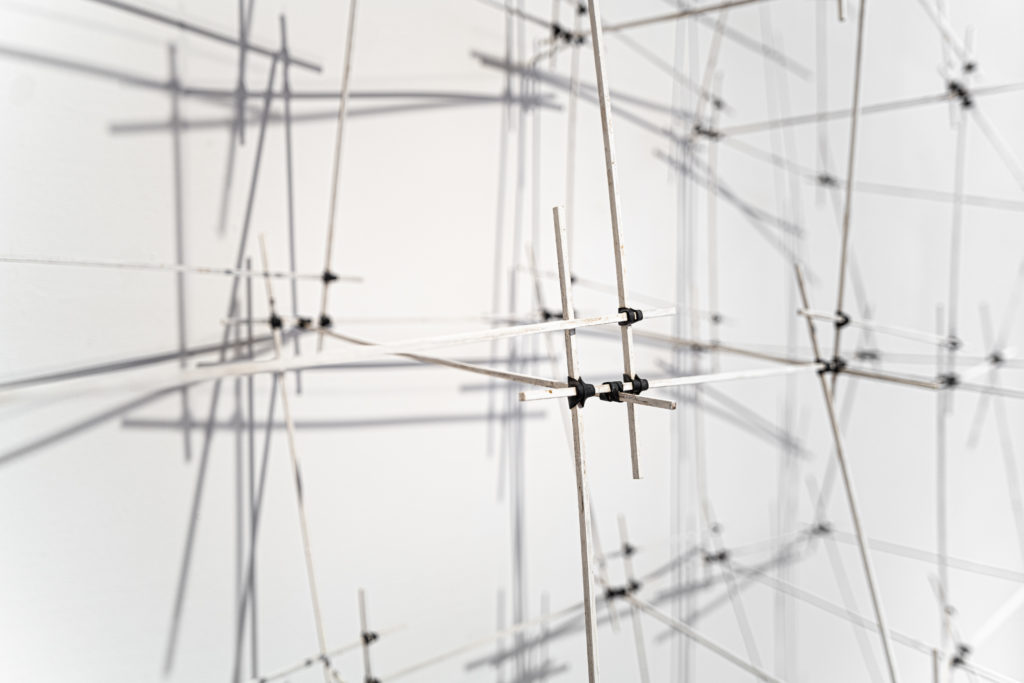 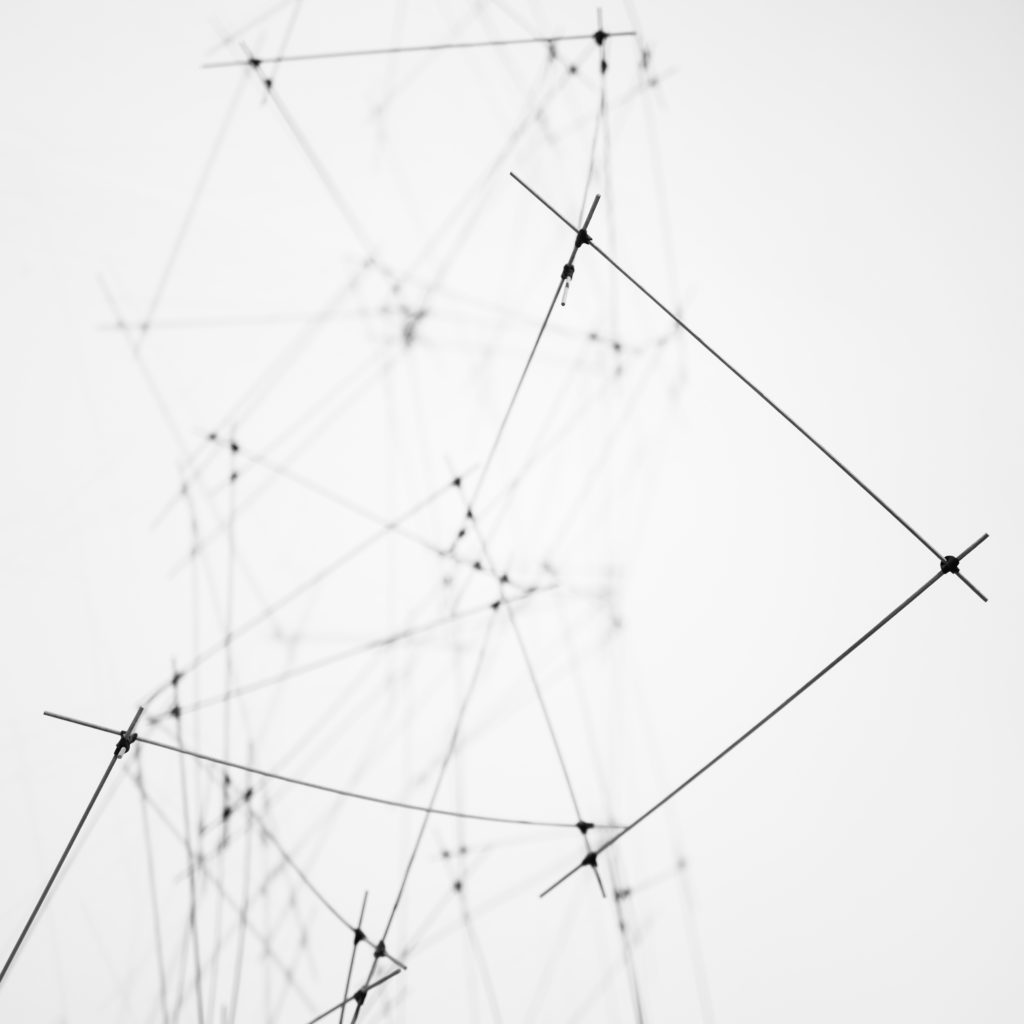 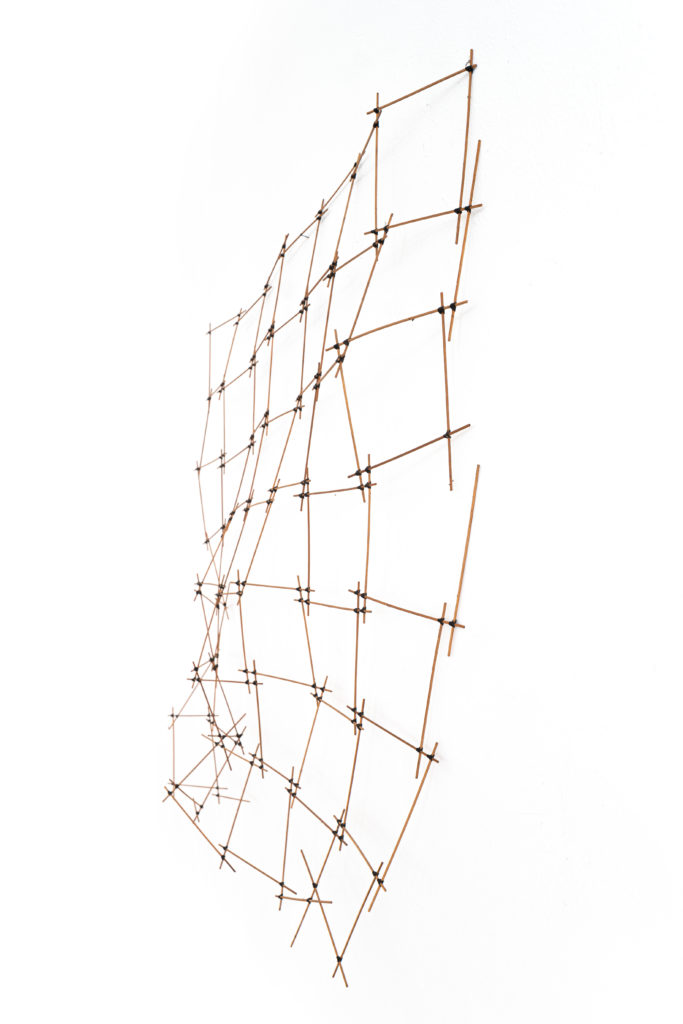 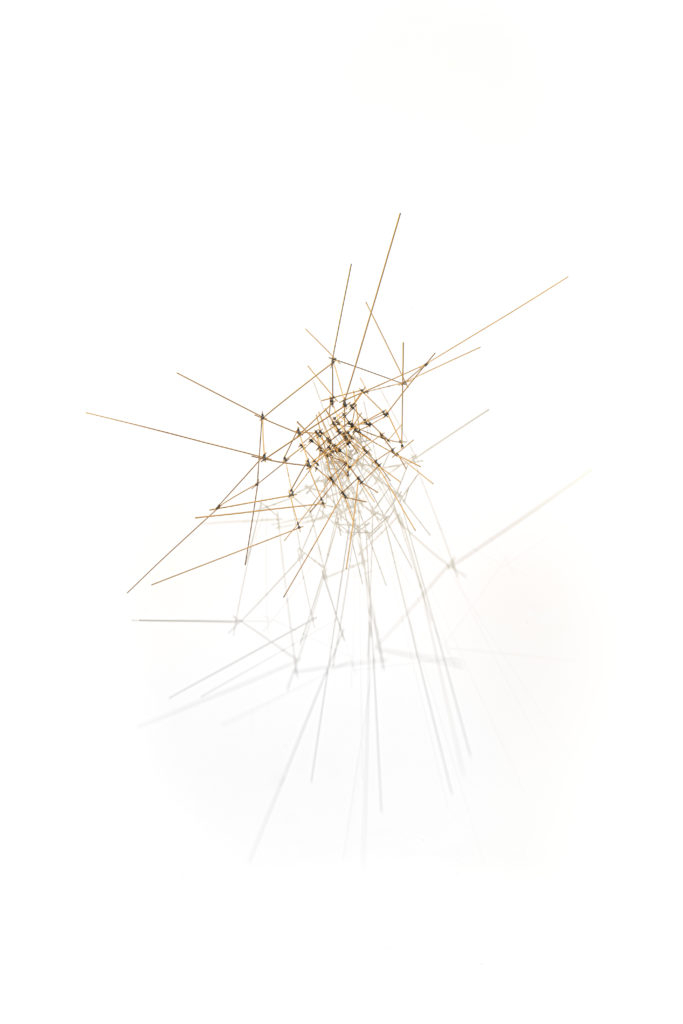 Leonardo Mosso is interested in the structure as a set of single parts and a system of relationships, “autonomous entity of internal dependencies.1
The structure-environments that Mosso theorized and realized from the Sixties onwards – definitively artificial subjects that nevertheless represent codes of identification, progression and growth that can be found in nature – manifest themselves as gemmations of oriented segments, frames of slats that branch out variably to signal themselves through a concrete and abstract presence at the same time: bound one to the other by means of joints, these linear elements draw in the void weightless masses of filaments, geometric efflorescences characterized by a dense transparency, clouds of vectors.
In physical-mathematical terms – and just like vectors – each of the linear elements that make up the structure-environment is an “entity” that allows us to describe its intensity (i.e. its size) and its orientation (i.e. its direction and direction), assuming the role of a material subject loaded with information, of significance that simultaneously incorporates and conveys multiple meanings.
Mosso’s works, constitutive of a vectorial space, are overbearingly generative presences that contrast their silent manifestation with the ideal verbal sonority of a living language, given by the association of a multitude of words – the single constructive elements – that by means of connection and relation components – the joints – are organized through their own grammar and specific syntax; “the semiological structure-architectural structure-linguistic equalization, the concept of “architectural phonology”, the systemic design procedures of complexification and concatenation of cells, all referring to three-dimensional space but related to concrete language through the metaphor of “sign”2 converge in the author’s thought to give body to the great cycle of his “semiotic structural systems”.
The structure-environments branch out into the void with “rods” reminiscent of the siliceous spines of some radiolari, pointing to the void with an intention of projective mobility, imbued in their substance by an implicit kinetic drive that prepares them for translation, rotation, centripetal or centrifugal movement. The frames that inhabit the space are connoted by a potentially unstable staticity: each “network”, subject to endogenous or exogenous tensions – according to a classification and nomenclature that Mosso himself has defined to distinguish its types – reveals itself in a specific posture among the many possible, caught in a temporal moment of formal equilibrium of the intrinsic energies of matter that, far from being considered definitive, can then yield and alter through a proactive collapse towards other configurations; exploiting the degrees of freedom allowed by the elements of joint between the parts, the structure-environments can inhabit the space according to variable figurations, changing continuously to arrange themselves in other arrangements allowed by the dynamic potential of their “genetic baggage”.
It is through this predisposition to geometric remodulation that each structure-environment reveals its main programmatic quality. As the author himself writes: “I design semiotic structural systems that in themselves are not yet the form but systems of generation, production and transformation of form. […] Structural design therefore does not anticipate the form, it offers only the system of generation of transformation and possibilities, from which infinite messages or even formal choices can derive. It proposes structures of possibilities.3
It is from this ideal vocation to the infinite generation of configuration possibilities that Mosso’s environment-structures derive their name: the structure that is environment coincides with the system that is place: “an architecture that, from a formal principle, follows to be deduced and produced until it is confused with the unlimited extension, that is an architecture that is not in space, but is space”.4
It is also thanks to the metamorphic attitude transformed in its structures that Mosso’s work transcends the simple creative gesture to reveal itself as an acute existential reflection, to deal – through the mediation of the theoretical-practical activity of designing – with absolute themes
The structure: “caught in the blindest point of matter, where upheavals and mutations are more rapid, it recognizes in transformability the pure act that defines it. Therefore structure, even when we hold it in our hands, is something that – really – is not there, because it is something that is available to be or to become. That is, something that at any point in its giving itself, drags with it the potentiality of form, which always coincides with it and is always captured in the disposition and in the act of its change. Therefore the structure-shape never ceases to remind us that the world to which it alludes is conceived as probable and the form of its consistence as susceptible to temporariness”.5