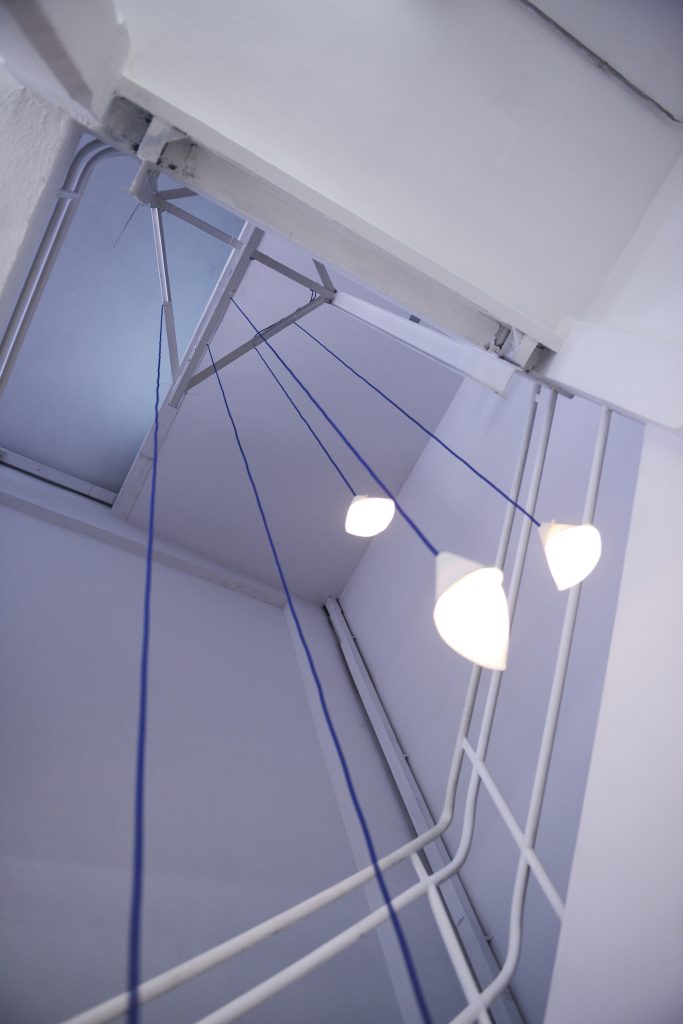 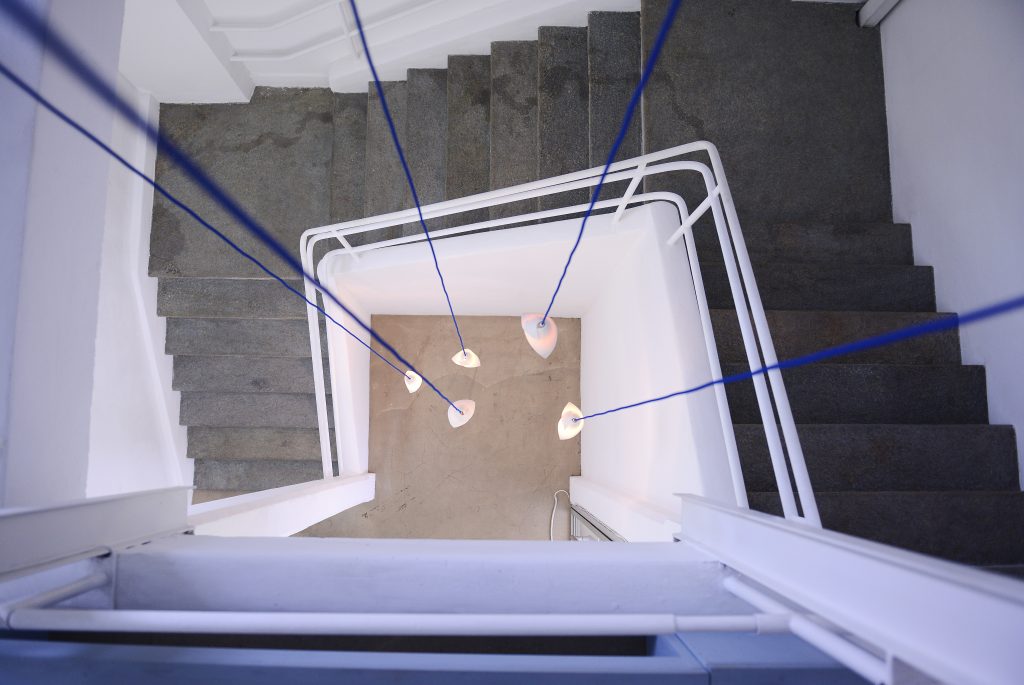 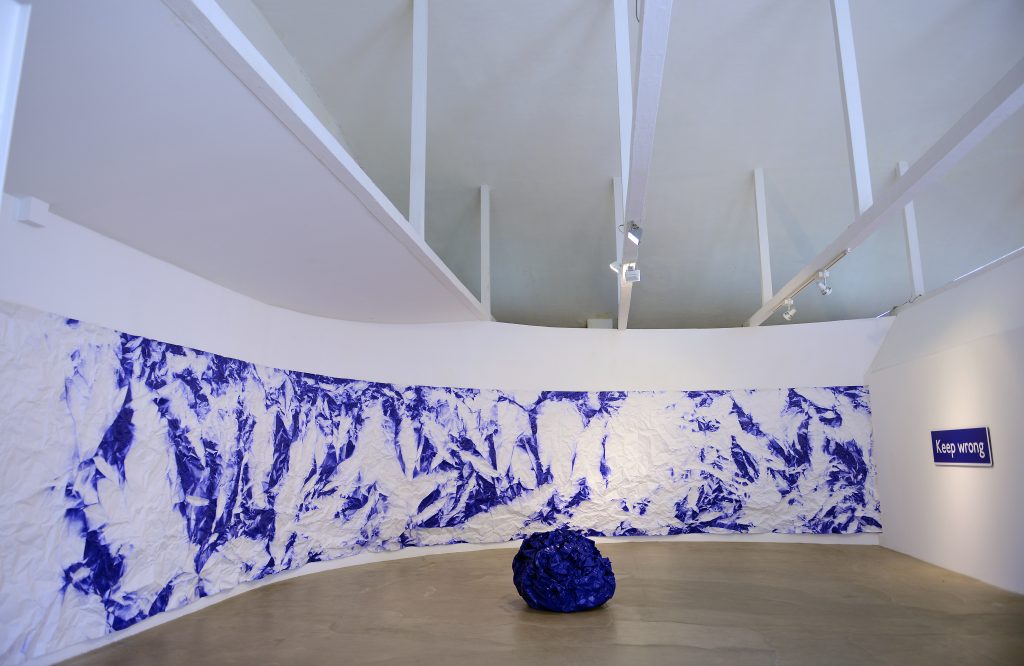 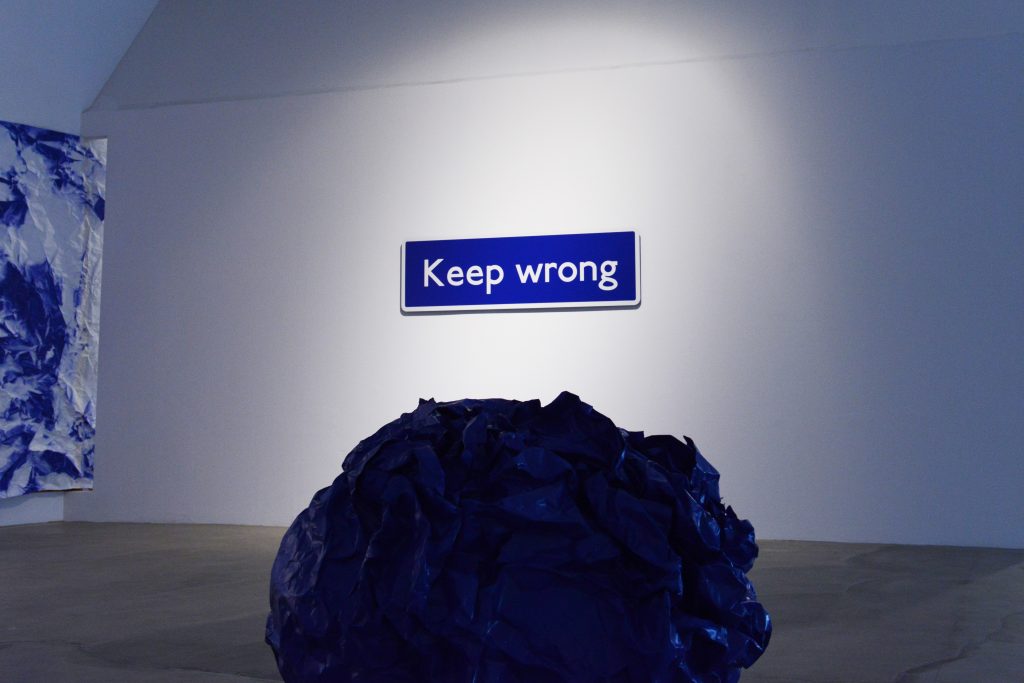 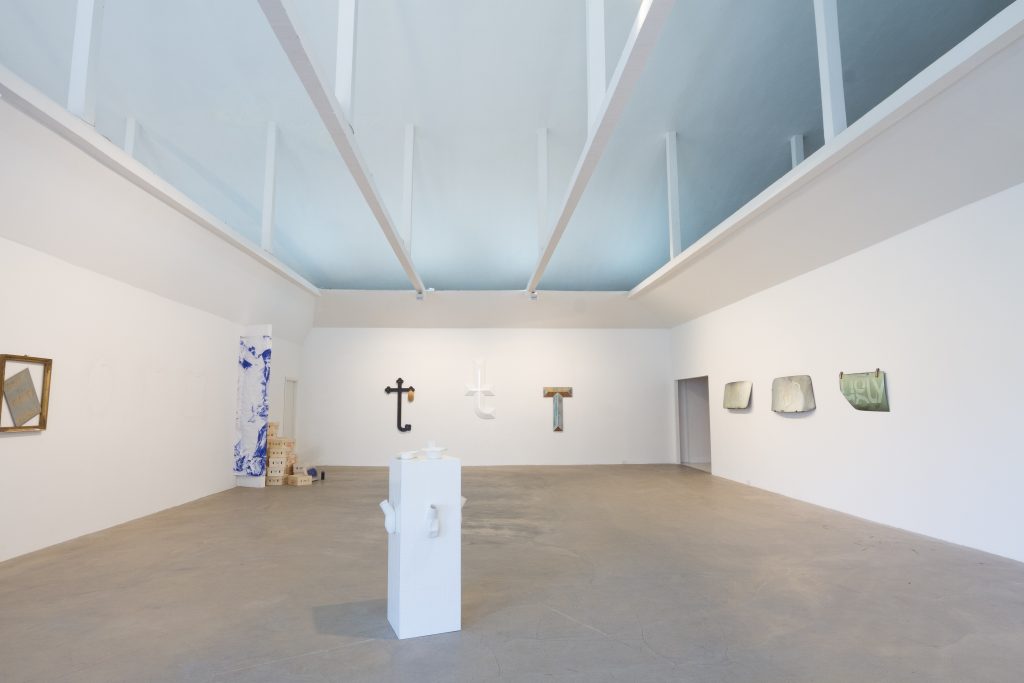 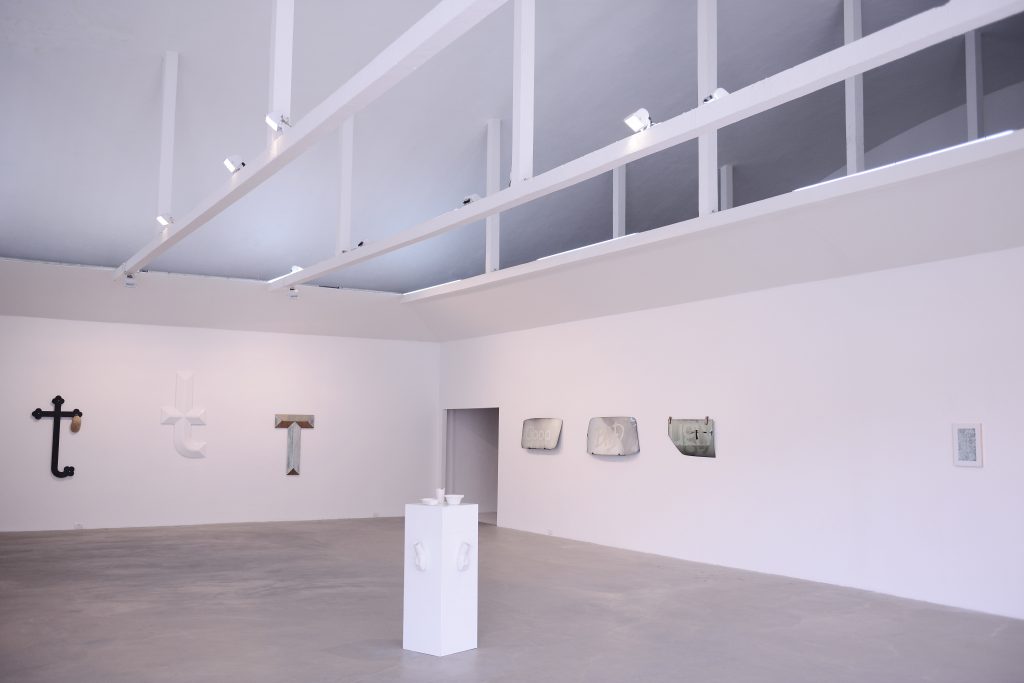 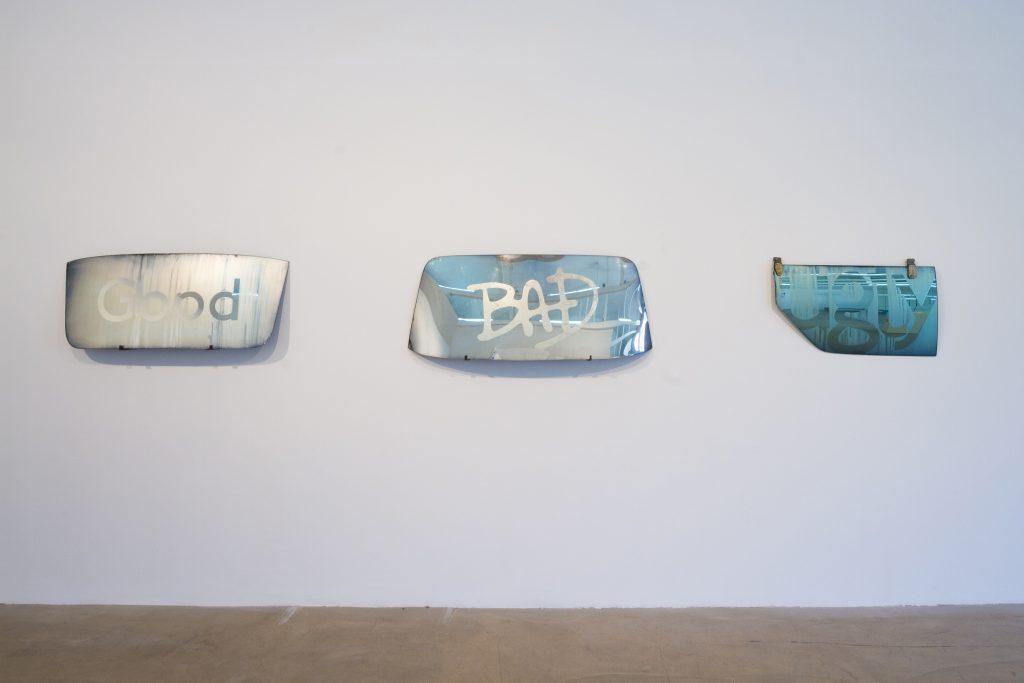 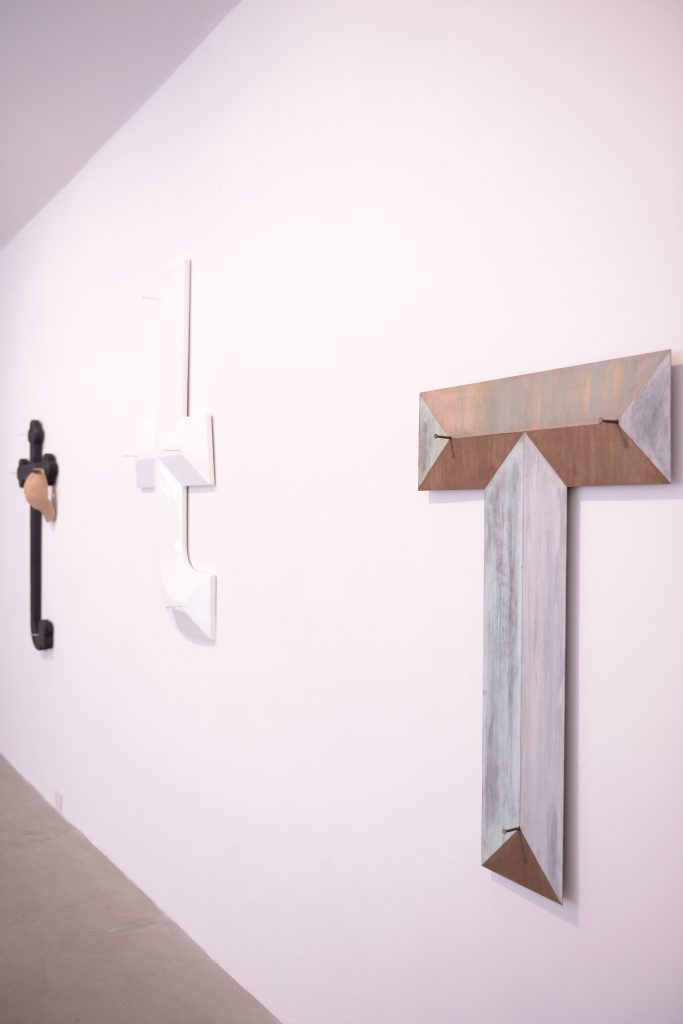 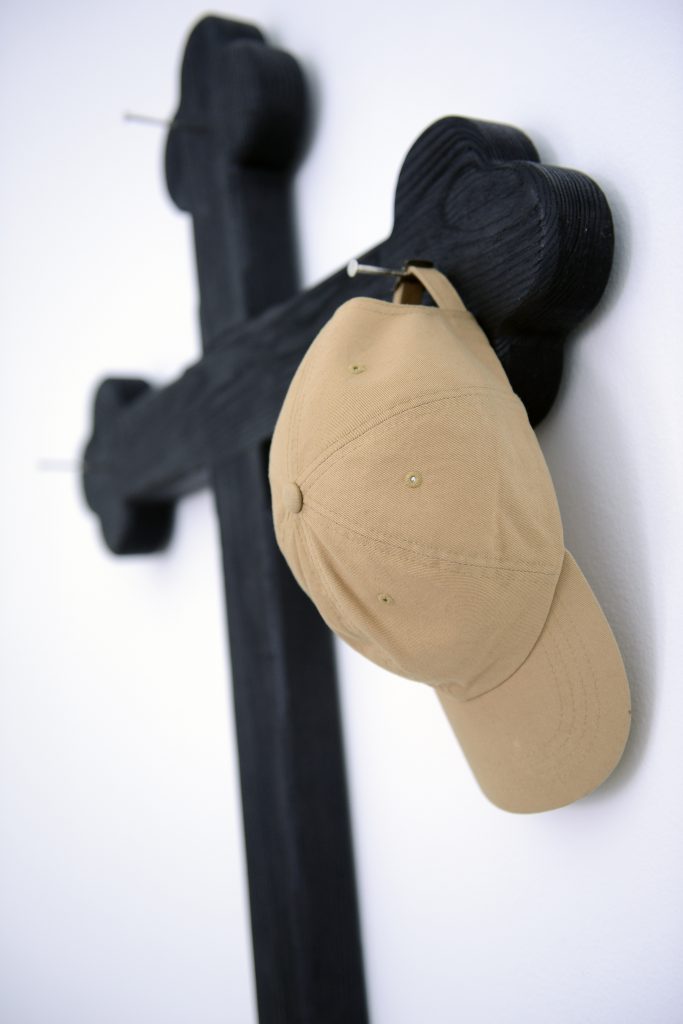 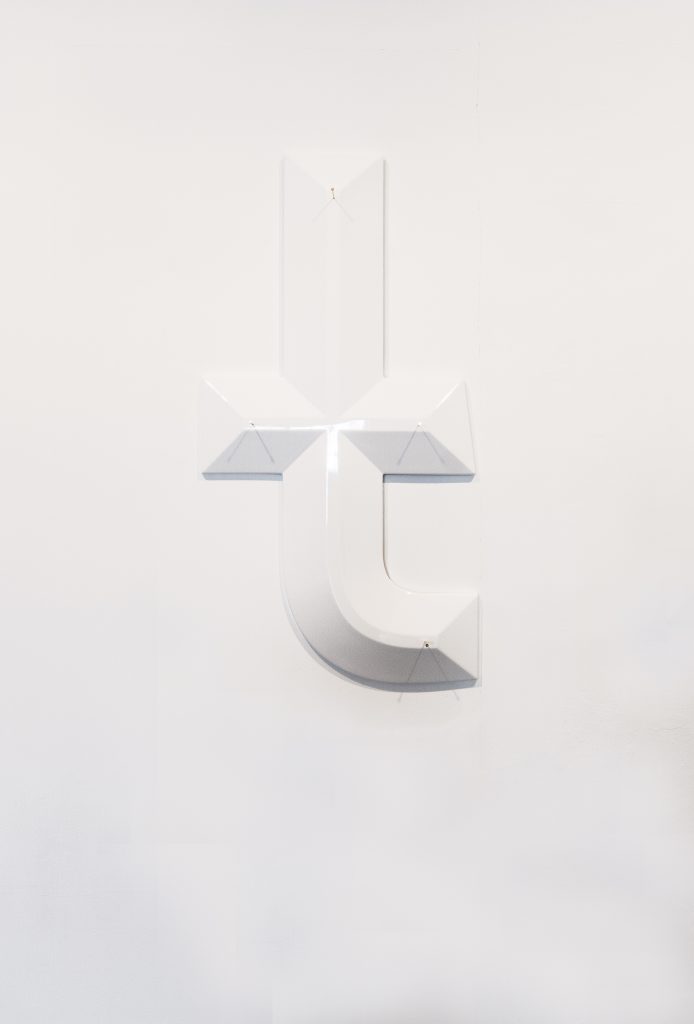 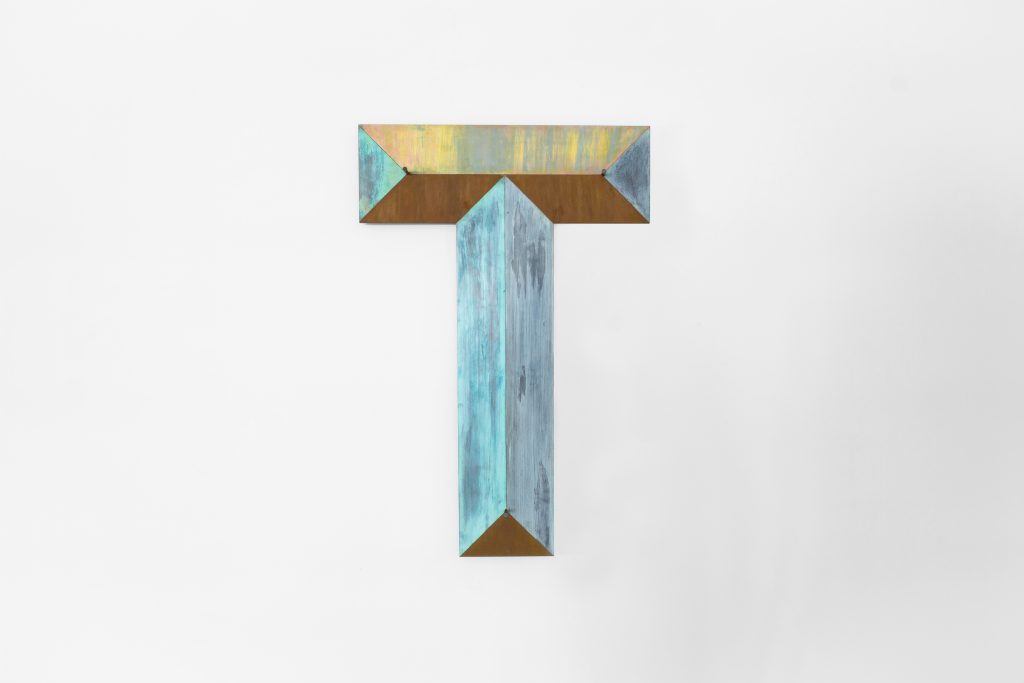 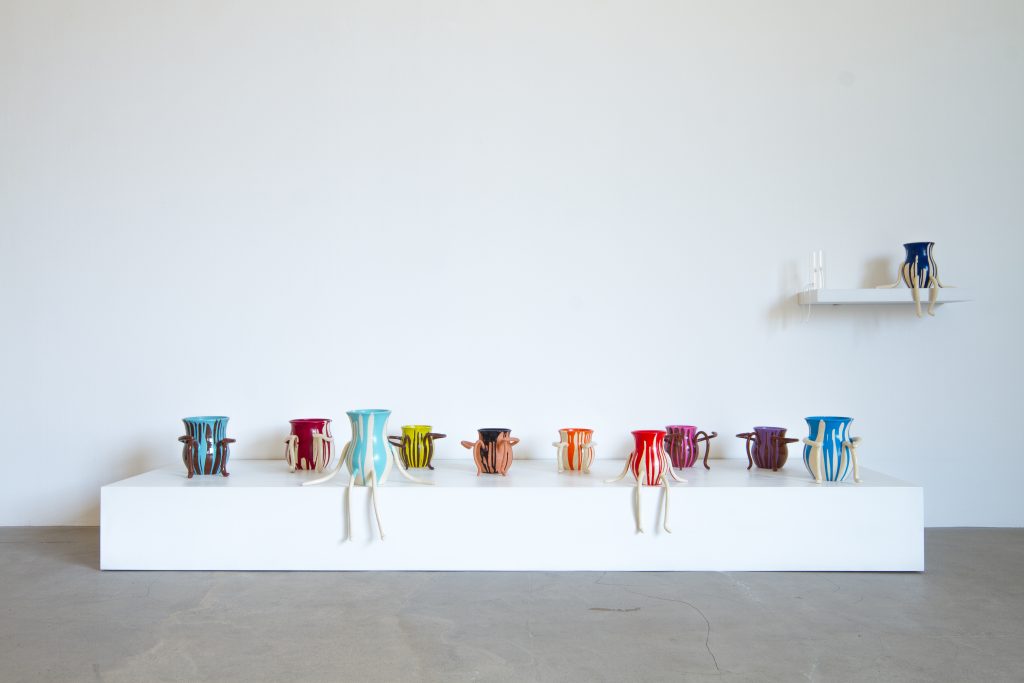 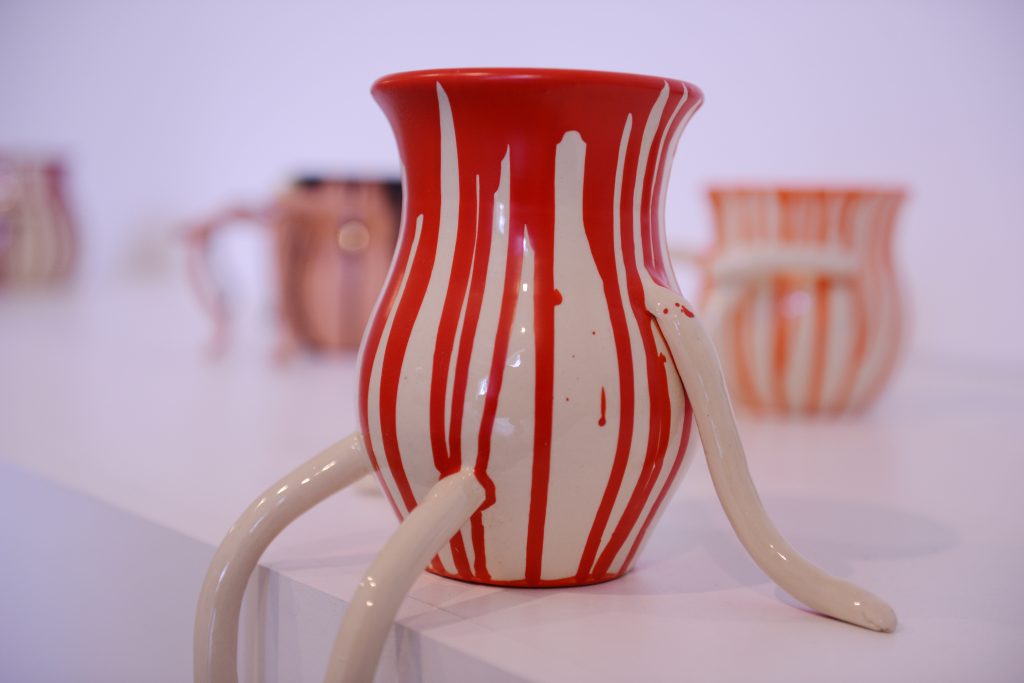 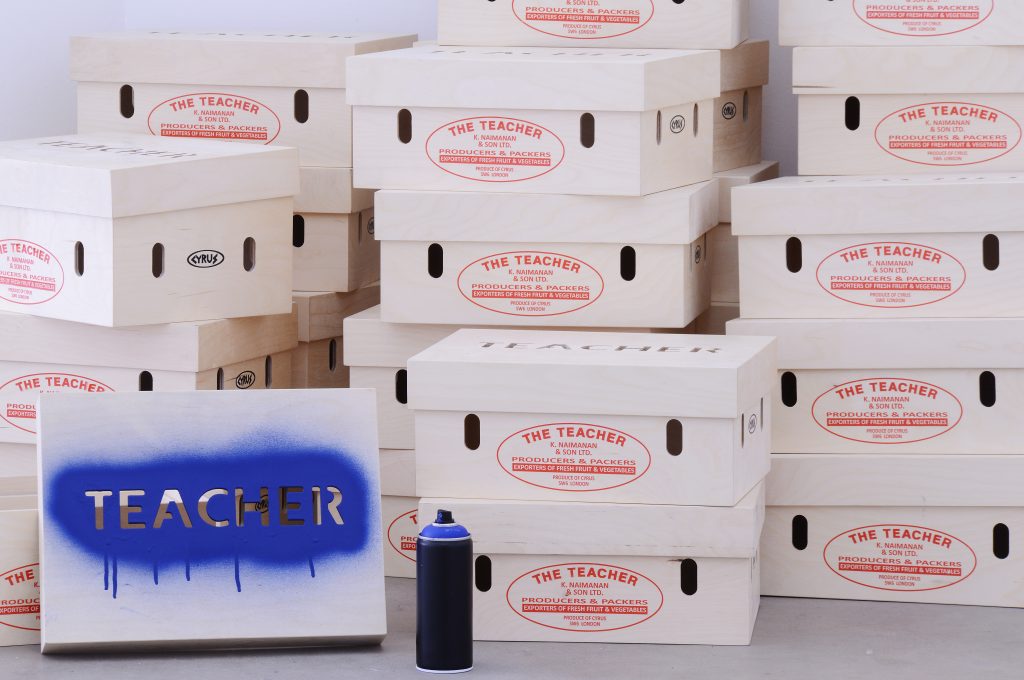 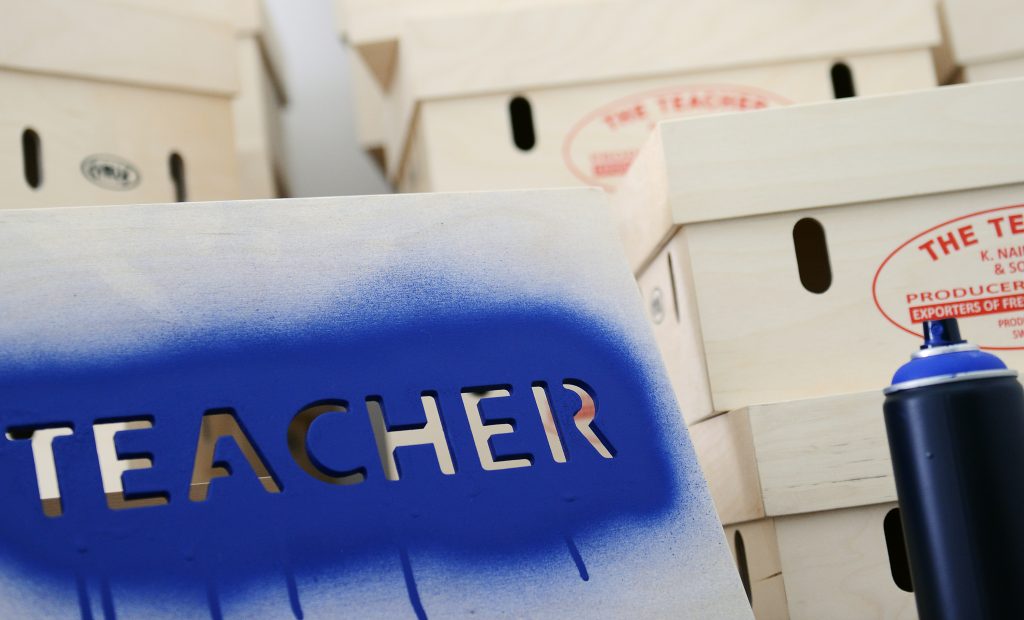 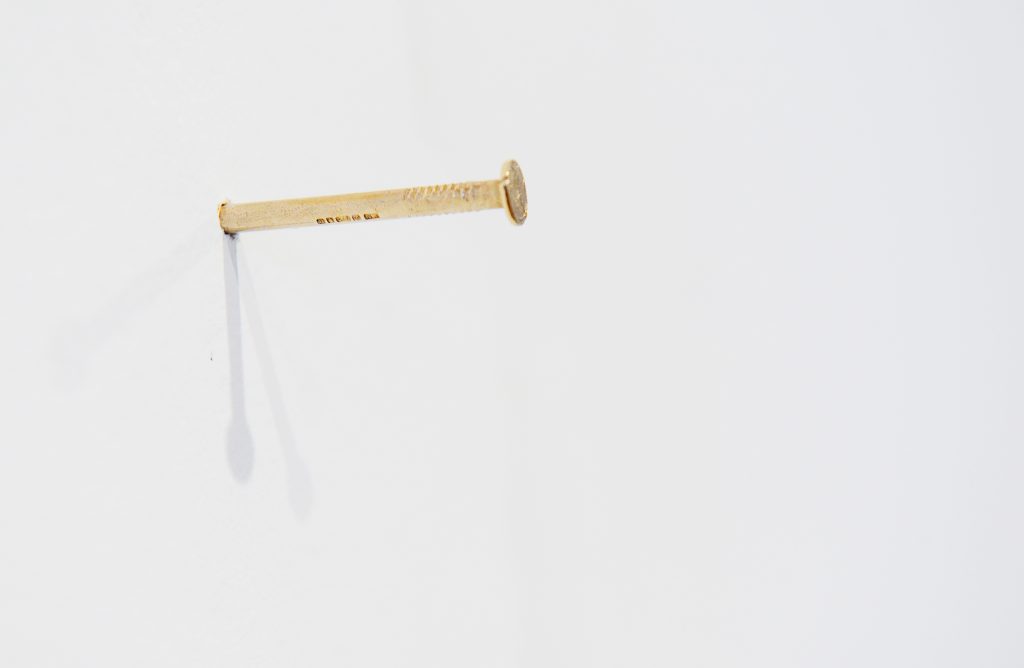 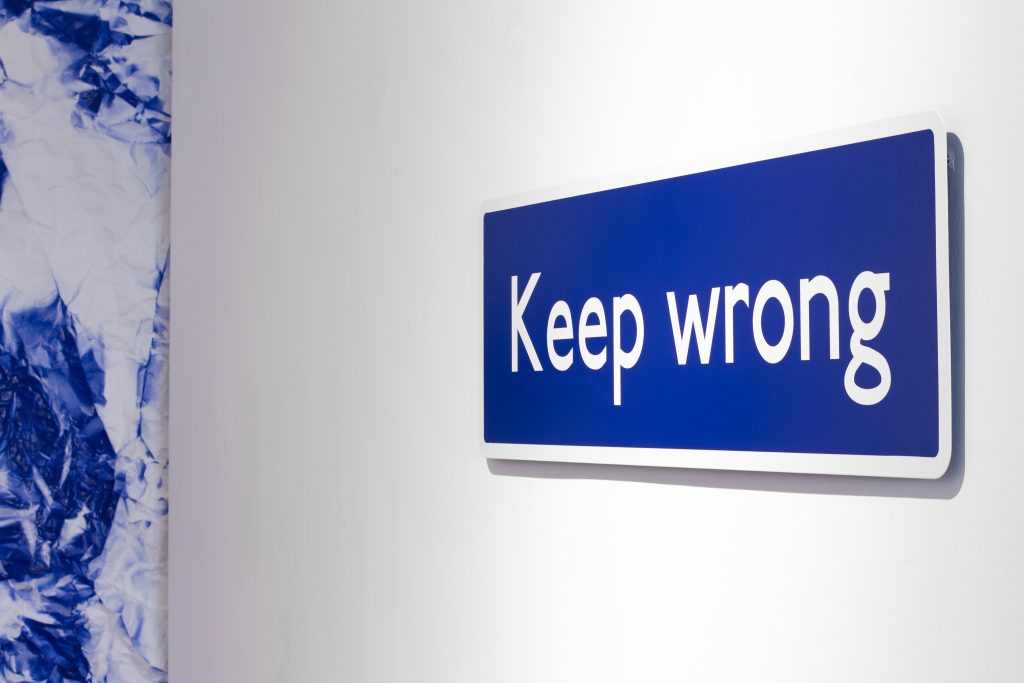 Naimanan uses playful and subversive twists to create objects that move away from their primary function toward an unconventional and inverted perspective that demands us to Keep Wrong rather than right.  Ça ne vaut pas un clou is based on the French expression for a worthless item and originates from the Hidden Wealth project presented at MoMA in 2005. Here Naimanan hides precious objects among those of little perceived value to both mask and emphasise their true worth. Cast silver and gold nails are hidden in boxes of ordinary nails, inviting viewers to reassess preconceived notions of value and pay attention to that which is hidden from view.  Ron Arad Toy is an action figure of the acclaimed designer that comes packaged with a miniature replica of the iconic Little Albert chair. A4 uses the most common paper size as a departure point for a delicate porcelain lamp that seems to levitate in space. Used & Empty is a series of small anthropomorphic vessels displayed as a group of friends lounging on a wall with crossed legs and arms. Naimanan’s background in graffiti and artistic vandalism still influence his work today – using and altering found objects to overturn familiar narratives and present a more challenging aesthetic perspective.
Ron Arad writes:’’I was really emotional when I found out that one of the applicants for the Royal College of Art was a graffiti artist and I did not cancel the interview when Khashayar confessed that he had sprayed the top of my Totem in Milan a few years earlier…It was interesting to see him invent his projects: a jacket for shoplifters, a device which disrupts the bar codes in supermarkets, swapping the prices of economic wines with more expensive ones, or platinum nails used to hang picture frames which were much cheaper than the nails themselves. I am also very fond of the toy which is a miniature version of me…’’.

KHASHAYAR NAIMANAN (*1976) was born in London to parents of Japanese and Iranian origin. He studied Product Design at Central Saint Martins College of Art and Design in London and then moved to Munich where he trained as a metal worker. In 2003 he completed his masters degree at the Royal College of Art in London, where he studied under Ron Arad. His work as an artist and designer ranges from hand-crafted studio pieces and furniture to large scale installations and paintings seen at the 56th Venice Biennale (2015). His work has been exhibited in museums and galleries worldwide, such as MoMA NewYork, V1 Contemporary Art Centre in Copenhagen and Design Museum London, triennale of Milan,  among others. He has collaborated extensively with designers Kram/Weisshaar on widely celebrated projects such as OUTRACE and ROBOCHOP. The royal Bavarian porcelain manufacturer